Ralph A. Marrinson, Douglas J. Von Allmen, and Jordan Zimmerman are the 2008 Inductees to the Huizenga College of Business and Entrepreneurship Hall of Fame

The health care industry has always faced challenges, from regulations to service issues. Those who take on these challenges as opportunities for improvement have been able to capitalize on the prospects. One such entrepreneur is Ralph A. Marrinson, a longtime leader and innovator in the field.

Working as a stock boy in his father's five-and-dime store, he learned early on the values of foresight, integrity, and dedication. Marrinson is now the founder of family-owned and operated Marrinson Senior Care Residences.

After an extensive career in hospital administration, Marrinson and his late wife, Jeanine, moved to South Florida and opened Manor Pines Nursing and Convalescent Center in 1966. Originally a 120-bed facility, Manor Pines developed into a 206-bed facility.

In 1973, they opened the doors of Independence Hall, the first senior residential residence in Broward County – at a time when few such facilities existed. Currently, the company operates seven facilities that provide options from independent and assisted living to medication management and respite care. With five facilities in South Florida and two in South Carolina, Marrinson and his team of professionals are committed to providing the highest level of service to all residents. 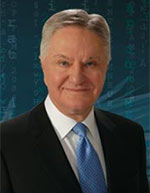 
A high school dropout, Douglas J. Von Allmen was not expected to acquire more than 50 different businesses during his career.
Few could have predicted he would return to high school, graduate from college, and become a financial officer in the insurance industry before striking out on his own in 1978. With savings of $30,000, he started his life as an entrepreneur. He acquired several companies and struggled to make them successful.


In 1990, he bought Sunsations Sunglass Company, a chain of 70 sunglass stores. He sold it in 1995 after building the chain to 350 stores. Beauty Alliance was the largest privately owned professional beauty supply distributor in the country, with distribution channels in 24 states and sales of $500 million.


In 2007, Von Allmen sold the successful company to L'Oréal. Currently, he manages more than $1.5 billion in investments through a highly diversified investment fund by following proven strategies used over the past five years to realize annual returns of 25 percent.


Jordan Zimmerman is founder and chairman of Zimmerman Advertising, the 15th largest advertising agency in the country, with 22 offices, more than 1,000 employees, and $2.5 billion in published billings.


He also shares the ownership of the Florida Panthers hockey team. Zimmerman developed a strong work ethic and entrepreneurial spirit at a young age, selling greeting cards and managing a paper route before age 10.


As an advertising major at the University of South Florida, he developed a love for an industry that would soon become his passion. Upon graduating, he secured interviews in New York City, hopeful of landing his dream ad agency job. But after no offers, he realized the need to further his education. Perseverance allowed him to push through the early rejection after graduation, motivating him to acquire hands-on experience while pursuing his graduate degree.

Zimmerman had a vision, and with his M.B.A. and $10,000 in savings, he opened his own agency. Today, the company serves clients in every retail sector from fast food to real estate. In 1999, Zimmerman sold his company to Omnicom, a leading global marketing and corporate communications group and a premier holding company. The partnership remains strong, with Zimmerman serving as chairman of the agency.
Return to top of page