Mitchell Berger, Mike Jackson, and Don Taft are the 2010 Inductees to the Huizenga College of Business and Entrepreneurship Hall of Fame

Mitchell Berger founded Berger Singerman in 1985 and currently serves as Chairman of the business law firm. He is a member of several state Bars and the American Bar Association.

Berger has been active in public affairs at all levels of government. He was co-chair of the Community Relations Committee for the Summit of the Americas in 1994 and a member of President Clinton's Transition Team for the EPA and Department of the Interior in 1992-1993.

Part of the Distinguished Lecture Series at NSU Business, Berger was also a guest lectured for Vanderbilt University and Washington University. He has published several articles in law journals, including the Nova Law Review, the National Law Journal, and The Jurist.

Berger has represented major corporations in complex commercial litigation throughout the United States. He represented Al Gore in Bush v. Gore. Among other honors, Gold Coast Magazine named him "One of the 50 Most Powerful People in Broward County." Mitchell has also received the Humanitarian Tree of Life Award from the City of Hope.

Mike Jackson became Chief Executive Officer of AutoNation, Inc., in 1999 and its Chairman in 2002. Before that, he served as president and CEO of Mercedes-Benz USA, Inc., which oversaw the German automaker's U.S. sales operation and its franchised dealerships.

While serving as the U.S. Senior Marketing Executive for Mercedes-Benz, Mike helped reinvigorate the brand in this country. A former automotive retailer, he served as the managing partner of Euro Motorcars of Bethesda, Maryland, an operator of 11 new-vehicle franchises. Jackson also has served as a Mercedes-Benz district manager and as chairman of the Mercedes-Benz National Dealer Council.

Jackson was named Automotive Hall of Fame Industry Leader of the Year for 2003. He has received numerous other honors and awards from various publications and businesses for his work in the automotive industry and in business and marketing.

As one of the nation's leading speakers on energy and economics, Jackson has spoken at schools, colleges, planning organizations, and conferences. He is also a contributor to CNBC and Bloomberg Television. 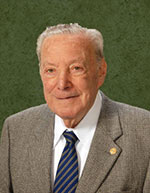 Don Taft has spent more than 50 years as a leader in business, having founded, owned, and managed private and publicly traded companies. He has applied his business expertise across a wide range of industries including manufacturing, distribution, wholesale, retail, and entertainment.

Taft's philanthropic and charitable manner has led him to support many worthwhile causes in South Florida, as well as donate his personal time and leadership skills to numerous children's health care facilities and nonprofit organizations.

He has worked with Gilda's Club, Doctors Without Borders, the Museum of Art, and the Museum of Science and Discovery, just to name a few. In recognition of a generous gift the Taft Foundation made to Nova Southeastern University, the University Center was renamed in his honor.

The gift also provided a permanent home for Special Olympics Broward County at NSU, establishing the only Special Olympics office located on a university campus in the world. Taft's contributions also include donations to the Conine Clubhouse, a home for parents and families of patients at Joe DiMaggio Children's Hospital.