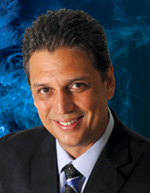 Armando Leighton's dream was to become a veterinarian, but his love of aviation and entrepreneurial spirit would lead him to build one of the industry's premier global aftermarket business jet supplier. Headquartered in Fort Lauderdale, CRS Jet Spares, Inc., (CRS) has offices and strategic distribution centers in London, Singapore, and Brazil.

As a teenager, Leighton earned $1.50 an hour working for an aviation company in shipping and receiving. At age 19, he was purchasing manager for a repair station and quickly learned about the commuter, airline, and helicopter industries. Thereafter, he purchased parts for aircrafts such as Rockwell Sabreliner and Learjet. In 1982, Leighton saw an opportunity and, with $2,000 in savings, he established Corporate Rotable & Supply, Inc.

Within three years, sales had exceeded $1 million with one part-time employee, his mother. Customers around the country would receive parts via overnight shipping, not knowing the company's operations were based in a family garage. Today, CRS services aircrafts such as the Gulfstream GV/550, Global Express, and the Falcon 900 family of jets, housing one of the world's largest privately owned spare parts inventory.

Leighton serves on boards including the Broward Workshop and Gilda's Club, among others. He supports organizations such as Joe DiMaggio Children's Hospital Foundation, the Museum of Art, and the National Business Aircraft Association Foundation.