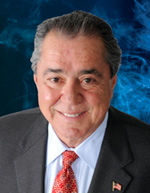 Felix Sabates left his native Cuba at age 16 and excelled at his first job selling cars. He took a representative's position at Top Sales Company, Inc., and generated record-breaking revenues. At age 32, Sabates bought the company and launched products such as the Teddy Ruxpin Talking Teddy Bear and Atari's videogame Pong. Top Sales became one of the most successful retail manufacturers in the United States.

In 2000, Sabates bought Trinity Yachts, a custom yacht builder. He is co-owner of International Yacht Collection, one of the largest yacht management, charter, and brokerage companies in the world with offices in Monaco, the Bahamas, and Sint Maarten. In 2004, Sabates entered the automobile industry and currently owns Hyundai, Infiniti, Mazda, and Mercedes- Benz dealerships.

Serving on numerous boards, Sabates has given of his time and money for civic and philanthropic causes. The Boys and Girls Club of Broward County, the Levine Children's Hospital, and the Carolina Prostate Research Foundation are just a few of the organizations he supports.