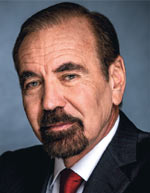 Mr. Jorge M. Pérez is the chairman and chief executive officer of Related Group of Florida, a leading developer of distinctive residential projects and the largest multifamily real estate development firm in Florida. In addition, it is the largest Hispanic-owned business in the United States. Its current portfolio represents assets under development in excess of $10 billion. Under Pérez's direction, the company has redefined the South Florida landscape, building and/or managing more than 60,000 apartments and condominium residences.

Pérez's passion for vibrant urban centers is reflected in his community involvement in the arts and cultural affairs. He currently serves on the board of directors of the Pérez Art Museum Miami and is spearheading the capital campaign for its new Museum Park location in Miami's Bicentennial Park. He also serves as a member of the Miami-Dade Cultural Affairs Council and is a director of the Miami International Film Festival. In addition, Pérez is a member of the University of Miami's Board of Trustees.

A recipient of numerous awards for his professional and philanthropic achievements—including Ernst & Young's Entrepreneur of the Year, Hispanic Magazine's Hispanic Achievement and Business Entrepreneurship Award, and The Beacon Council's 2015 Jay Malina Award—Pérez is also an author. His first business book, Powerhouse Principles: The Billionaire Blueprint for Real Estate Success, became a best seller.

Born in Buenos Aires, Argentina, to Cuban parents, Pérez grew up in Bogata, Colombia. He received his bachelor's degree from Long Island University - C.W. Post Campus and his master’s degree in urban planning from the University of Michigan.