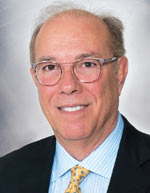 In 2015, Mr. Mark B. Templeton retired from his role as president and chief executive officer of Citrix Systems. He had joined Citrix in 1995 as vice president of marketing, before the company's initial public offering. He was appointed president in 1998 and chief executive officer in 2001. Under Templeton's leadership, Citrix grew from a $15-million organization with one product, one customer segment, and one go-to-market path, to a global software industry leader with annual revenues of more than $3 billion and with more than 100 million users worldwide.

his 20 plus years with Citrix, Templeton championed a vision for a virtual workplace—powered by virtualization, mobility management, networking, collaboration, and security solutions—that enable new ways for people to work and live better. His energy and vision propelled Citrix into the technology, business, and community spotlight. Templeton also nurtured a design-centered culture based on the values of respect, integrity, and humility, earning Citrix multiple "best places to work" awards.

Today, Templeton is cofounder and executive chairman of 4Sense, Inc., a human motion analytics company. He is also a CEO mentor and an early-stage investor in a variety of new technology areas. In addition, Templeton serves as director of Equifax, one of the world’s largest information services firm, and Keysight Technologies, a global electronic test and measurement company.

Templeton holds a B.A. in Product Design from North Carolina State University and an M.B.A. from the University of Virginia. He is the recipient of numerous awards and recognitions including an AeA Abacus Award for Outstanding High-Tech Executive, "Businessperson of the Year" (EVIE Award), and an Excalibur Award from the Sun Sentinel Media Group.