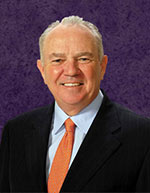 Mike Jackson became chief executive officer of AutoNation, Inc., in 1999 and chairman in 2002. Before that, he served as president and CEO of Mercedes-Benz USA, Inc., which oversaw the German automaker's U.S. sales operation and its franchised dealerships. While serving as the U.S. senior marketing executive for Mercedes-Benz, he helped reinvigorate the brand in this country. A former automotive retailer, he served as the managing partner of Euro Motorcars of Bethesda, Maryland, an operator of 11 new-vehicle franchises. Jackson also has served as a Mercedes-Benz district manager and as chairman of the Mercedes-Benz National Dealer Council.

Jackson was named Automotive Hall of Fame Industry Leader of the Year for 2003. He has received numerous other honors and awards from various publications and businesses for his work in the automotive industry and in business and marketing.

As one of the nation's leading speakers on energy and economics, Jackson has spoken at schools, colleges, planning organizations, and conferences. He is also a contributor to CNBC and Bloomberg Television.