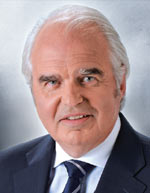 Mr. Per-Olof Lööf was the chief executive officer of KEMET Corporation and the chairman of the board of NEC Tokin Corp., a joint venture between NEC and KEMET. Both companies are leading global manufacturers of electronic components with a total of 16,000 employees and operations in more than 30 countries. The companies have offices in Greenville, South Carolina; Tokyo, Japan; and Fort Lauderdale, Florida. Lööf is also the past president and chief executive officer of Sensormatic Electronics Corporation, the world's leader in electronic security. He led the organization through a turnaround and managed its successful acquisition by Tyco International, Ltd.

Before Sensormatic, Lööf worked for NCR Corp., the world's leader in ATM machines, where he was the senior vice president of the Financial Systems Group. Prior to NCR, he was chief executive officer for AT&T Istel, one of Europe’s leading providers of integrated computing and communication services. Previously, he worked at Digital Equipment Corporation, where he was vice president for the Financial Services Business and then vice president of Sales and Marketing, both for the European division. He was also a senior manager with Andersen Consulting in both the United States and Sweden.

Lööf was honored by Ernst & Young as an Entrepreneur of the Year in the Carolinas in 2012. In addition, he was awarded the South Florida Business Journal's Broward Ultimate CEO the same year. Recently, he was elected to the Royal Swedish Academy of Engineering Sciences (IVA). He has served as Honorary Consul of Sweden for the State of Florida since he received his exequatur status from the United States Department of State in 2006. Lööf has a M.Sc. in Economics from the Stockholm School of Economics.