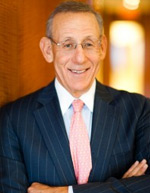 Stephen M. Ross is the Chairman and Founder of Related Companies, a global real estate and lifestyle company defined by innovation in all aspects of property development, design, service and wellness. The company has over $50 billion in assets owned or under development including the neighborhood-defining Hudson Yards, and owns Equinox® Fitness Clubs, Equinox Hotels and SoulCycle, further expanding the company's capabilities into the hospitality, health and fitness arena. The company was recently named one of the 50 Most Innovative Companies in the World by Fast Company Magazine.

With offices on three continents, Related was founded and is headquartered in New York where the company has dramatically redefined the concept of metropolitan living by introducing extraordinary residential condominium and rental properties in Boston, Chicago, San Francisco, Los Angeles and New York City and is also one of the largest owners of affordable housing across the nation.

Mr. Ross is the owner of the Miami Dolphins, a franchise that has become one of the most fan-friendly under his leadership. Mr. Ross is also Chairman and co-founder of RSE Ventures, a multi-national technology, sports and entertainment venture firm. RSE has invested in and incubated a number of diverse businesses, some in partnership with entrepreneur Gary Vaynerchuk. Investments include Resy, David Chang's Momofuku, Next VR and PrimeSport. RSE also created and launched the International Champions Cup, a global pre-season soccer tournament.

Mr. Ross is Chairman of the Board of Directors of Equinox Holdings, Inc., serves on the Executive Committee and is a trustee of Lincoln Center, and is a trustee of New York-Presbyterian Hospital. He is a director on the board of the Jackie Robinson Foundation, the New York Stem Cell Foundation, and The Shed and is chairperson emeritus of the Real Estate Board of New York (REBNY), the city's leading real estate trade association. Mr. Ross is also a director on the board of the World Resources Institute (WRI) and established both the WRI Ross Center for Sustainable Cities -- a new, innovative initiative to integrate urban planning, sustainable transport, energy and climate change, water resources, and governance -- and the Ross Initiative in Sports for Equality (RISE) to harness the unifying power of sports to improve race relations and drive social progress. In 2013, Mr. Ross pledged to give more than half of his estate to philanthropic causes and charitable organizations through the Giving Pledge, a long-term global initiative created by Warren Buffett and Bill and Melinda Gates that aims to inspire deeper engagement in philanthropy and increase charitable giving globally.